EDIT: Jussi posted this post to the Manifesta 9 Facebook wall and it was liked! This is as close as it gets! 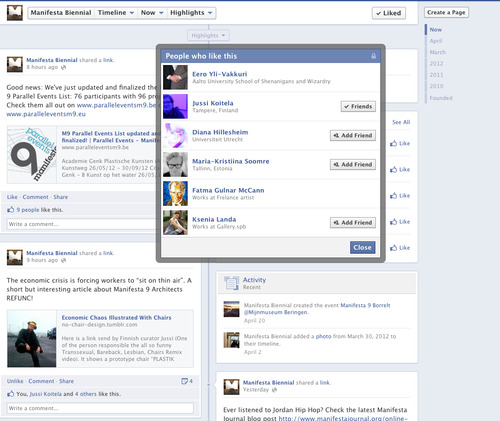 REFUNC is a group which “..operates on the borders of architecture, art and design and creates new products from old materials” and Manifesta 9 call it’s self “the only itinerant european biennial of contemporary art...”.

In making representations of the “PLASTIK FANTASTIK” the REFUNC crew has used workers as models sitting on their chair.

I hope those are the artist dressed in their working uniforms. The elderly man has “REFUNC” written on his working jacked. For the NCD-Campaign we have also used “the contemporary worker uniforms” in our invisible chair representations. Our reason for showing the invisible chair with a worker sitting on it was to: Illustrate that the economic crisis is forcing workers to “sit on thin air”, or that the workers have had “their chairs pulled from underneath them”. Investments and retirement funds are being destroyed by the global banking crisis. If the worker where to look down and notice that there is no chair, he would fall on his ass. And yes, it’s me in the photo and Jesse is behind the camera.

On their website REFUNC gives a description for their artwork. It’s stated to be an “adaptation of PVC garden chairs model ‘succes’ to social network arrangements”. I don’t understand this well. There is a typo in the description and it feels like a fast translation.

Judging from at the pictures it’s apparent that the artwork acts as a statement: The maneuvers and steps taken to fix the economic crisis are mostly effecting the working classes. That workers are forced to live in tight corners and their space is being reorganized by top-down-design. The current economic chaos illustrated with chairs. The logic is the same as in an artists decision to use chairs as actors in a horror story – This leaves more room for the imagination. Image of a person sitting on thin air was also used in YLE – TV news when talking about the housing crisis of Spain. And as a final proof here there is this:

The chair where the asses of the most beautiful women of Finland have rested is being sold to pay for the salaries of the TV staff.

An other group working with economics, attending Manifesta 9 is the Estonian  Visible Solutions LLC which seems to mimic a business entity of a sort. Their own site is currently down (http://http//www.visiblesolutions.eu). Wonder if it’s a statement? It appears that mock-up companies like Ore.e Ref. are growing popular. But so far it seems that only a few of these artist run companies are really attempting to live trough their business.